The Athens Chamber of Tradesmen has been functioning as a legal entity of public law with a 51 member council elected every four years by its companies-members and a  9 member management committee. It was founded in 1925 and it is the Chamber with the largest number of members in Greece. Its registries comprise more than 150.000 active members in the commerce and services sector.

In order to effectively elaborate issues within the responsibilities of the Chamber and το provide its members with continuously improved services, the council is supported by a number of committees  that are processing  various issues that are within the interests of its members  such as competition,  brokers,  development,  city issues etc.

The Athens Chamber of Tradesmen is a part of the Greek  Chambers’ network  that is  member of Euro Chambers. It participates in the National Chamber Network of Women Entrepreneurs and cooperates with UEAPME (  European Association of craft, small and medium sized enterprises). It is also a member of  the Arab-Greek Chamber of Commerce and Development and the Greek National Committee of the International Chamber of Commerce (ICC).  Additionally cooperates with other European chambers, organizations, and SME stakeholders.

The Athens Chamber of Tradesmen has implemented a quality management system according to the requirements of the standard ELOT EN ISO 9001: 2008 and takes care of the continuous improvement of its efficiency. At the same time it has acquired managing sufficiency type II of the Special Secretariat for Digital Planning as well as the certificate ELOT 1429:2008 and ELOT 1431-3:2008 for management and implementation of co-financed   projects.

The Athens Chamber of Tradesmen has established two subsidiary companies for the promotion of the interests of its members, called «Promitheas» ( www.promitheas-eea.gr ) and «Hermes» ( www.hermeseea.gr ). 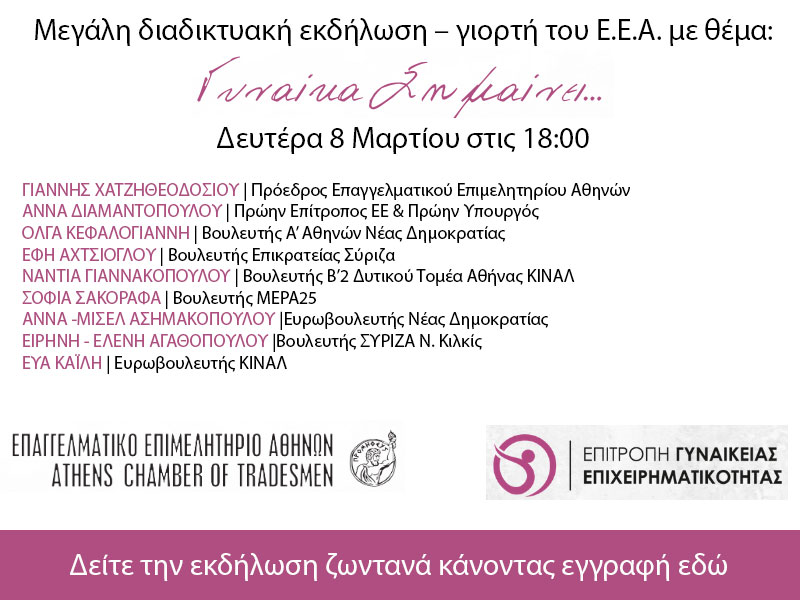